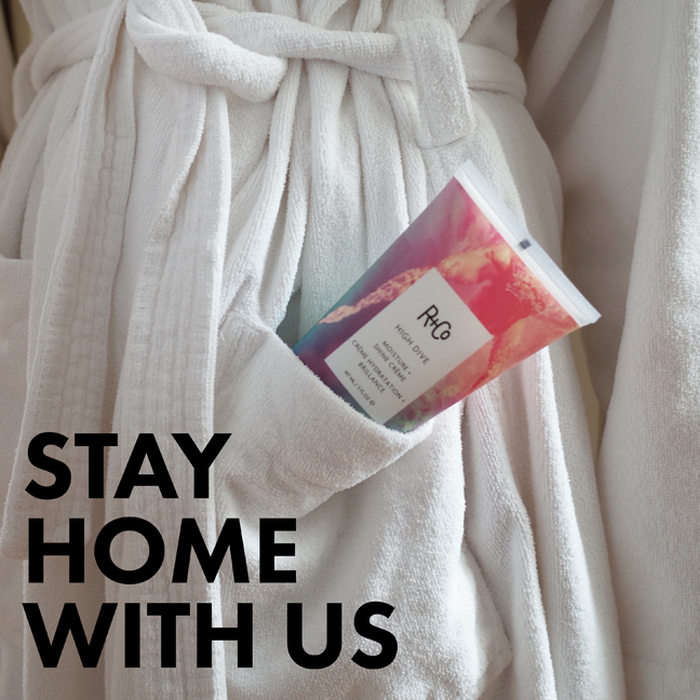 When you’re asked to stay at home and maintain a six-foot distance from your fellow humans, what do you do? Settle into a crossword puzzle? Teach yourself the newest banana bread recipe? Channel your inner hippie with some tie-dye? Getting creative with constructive activities can be challenging the longer we’re asked to social distance, but R+Co Co-Founder Howard McLaren and R+Co Creative Director Amanda Wall are here to share their off-the-beaten-track quarantine comforts—some discovered in isolation, some tried-and-true go-tos curated pre-pandemic—that can expand your mind while easing the strain of spending time apart.

BOOKSAmanda’s Picks: 'Interviews with Francis Bacon' by David Sylvester and 'My Year of Rest and Relaxation' by Ottessa Moshfegh“'Interviews with Francis Bacon' is the best book I’ve read during quarantine; it’s essentially a transcript of interviews between the author and Bacon, who is one of my favorite painters. The conversations explore his creative process and give insight into his upbringing, personal life and influences that shaped Bacon’s mind.“In February I was in Paris for Fashion Week with severe jet-lag and ended up finishing 'My Year of Rest and Relaxation' during a few early mornings there, a couple of weeks before the world stopped. It’s a book about a girl who tries to sleep for a year—a very relevant feeling right now.”Howard’s Picks: 'Least Wanted: A Century of American Mugshots' by Mark Michaelson“I love photography that documents history and culture, like 'Least Wanted: A Century of American Mugshots'. It includes an extensive collection of real mugshots that date back to 1940s until the mid-1960s. What’s great about it is you get to see real people, their style and a sense of American culture."

MUSICHoward’s Pick: KXLU 88.9 FM radio station – Los Angeles“KXLU is a college radio station with no pop music or commercials. I listen day and night as it switches DJs every two to three hours through every type of music you can imagine. I find myself using the Shazam app multiple times a day to discover the songs they’re playing—that’s how good it is. I personally love psychedelic bands, West German krautrock, world music or anything that has originality and is free from commercialization. That’s why I think KXLU is great because it has all of these types of music and more to broaden your musical tastes.”

FILMSAmanda’s Picks: 'Cul-de-sac' by Roman Polanski and 'The Bitter Tears of Petra von Kant' by Rainer Werner Fassbinder“I saw 'Cul-de-sac' for the first time in quarantine, and it might be my new fave Polanski movie. It’s about an isolated couple (an appropriate topic right now) living in a castle and some unexpected drama occurs and everyone loses their minds. It’s a fun one!“'The Bitter Tears of Petra von Kant' is a very intense film based on three women, and is essentially set in one room: a dream bedroom with the best style. Fassbinder films are a huge fashion reference for me. After every time I watch this film, I set my hair in curlers."Howard’s Picks: 'Blade Runner' by Ridley Scott and 'Zabriskie Point' by Michelangelo Antonioni“I did a movie night for R+ Co and chose the original 1982 'Blade Runner' by Ridley Scott as it was filmed and art-directed in such a way that truly captured a utopian society that dealt with artificial intelligence. The lighting is incredible and the cinematography is beautiful.“'Zabriskie Point', shot in 1970, is set in the title name’s area of Death Valley, California, and was one of three of director Antonioni’s point of views of different Italian and American youth cultures. I’ve always been intrigued by Death Valley, and Amanda [Wall] and I ended up going to there to shoot the packaging for our Dry Shampoo that bears the same name.”

PODCASTSAmanda’s Pick: 'Ram Dass Here and Now'“This is a collection of talks given by spiritual teacher and psychologist Ram Dass spanning over three decades; I like the ones from the ’70s the best. It’s a great glimpse into a cultural movement that was counter culture at the time. He was so perceptive, poignant and funny, spreading the idea of love and mindfulness.”

TV SHOWSAmanda’s Pick: 'Jeopardy'“OK, so I rarely watch television shows but I’m obsessed with 'Jeopardy'. There are a few seasons on Netflix and I’ve almost watched them all. I think I'm getting better, too; I got at least four of the ‘Final Jeopardy’ questions right—and I hope that impresses you.”