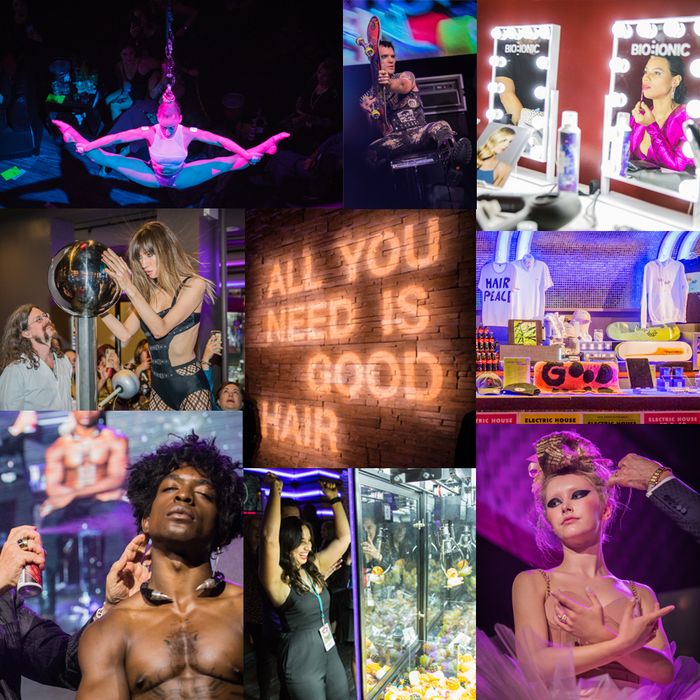 ELECTRIC HOUSE: All of the Galvanizing Details!

To say that ELECTRIC HOUSE lived up to its power-charged name would be an understatement. Held at Stage 48 in NYC, the night kicked off with guest Collective Member Danielle Priano styling Sony-signed classical pianist and activist Chloe Flower’s hair while Flower frenetically played the piano on stage. Showing the same exuberance as she did at the 2019 Grammys when she performed with Cardi B., Flower whipped her head back and forth in a melodic trance as she stroked the ivories—and Priano, all the while dancing to the beat, managed to gather Flower’s mane up into a perfectly “snatched” high ponytail using her P.S. x Danielle Priano ponytail elastics—no easy feat. From there, where hair will be years from now became a focus of R+Co’s top talent. Presenting the future of bridal beauty as Blu DeTiger played bass-assisted disco house, R+Co co-founder Garren galvanized the crowd with references to the past, present and tomorrow of hair for those who are aisle-bound by working in classics like braiding and finger waves with a future-forward twist. The texture of tomorrow came front and center with an Afro-cutting demonstration by R+Co Director of Content Andrean Noir along with guest collective member, Gerard Scarpaci from Hairbrained. Collective Member Ashely Streicher demonstrated her vision of red carpet deconstructed to street style’s impending evolution, incorporating her trademark West Coast ease—a look that will surely stick around for decades to come. Ever the appreciator of the past, R+Co co-founder Howard McLaren reimagined bygone Punk Rock references for their next lifetime through razor cutting—and then sent one model skateboarding off stage. To cap off the forward-looking hair demos, R+Co co-founder Thom Priano took shears and product to men’s pates, showcasing what he believes grooming will be like in salons of the future.All the while, theatrical acts, including contortionists and an aerialist who literally hung from her hair, kept the crowd positively electrified. Encouraged to interact with their surroundings, attendees tried their luck with a Claw Machine, dipped into the newest in R+Co Swag and indulged in hair touchups at a pop-up Pro Shop, and mingled with the R+Co team and peers at the energizing finale and cocktail party—all sponsored by Jack Daniel’s, Bio Ionic, Wet Brush, Phorest, After Pay, Smith & Cult, P.S. x Danielle, Platinum Seamless, Gant, Cindarella, Merrill Lynch, Mia Aesthetics, Framar, Coola, and Coca Cola.

You have no items in your cart.